All travel is life-changing, even if it’s just in little ways. The new experiences and sights and smells and food make you come home a little different from when you started out. If you’re fortunate enough to be able to travel frequently, all those little changes really start to add up.

This is true for all travel, but it’s really noticeable when you drive around Italy for a week.

When Buck starting getting grumpy about not having any trips lined up and we started looking into alternatives to the Caribbean, I did my initial research by checking out a company my mom had used in the past, Gate 1. They do a lot of package tours (if it’s Tuesday it must be Turin type stuff), but they also do some packages for independent travelers where you get a flight, hotel, and rental car. It was really inexpensive so I bit, but we won’t do it again.

Why not? Because I’m a control freak. The whole idea of putting it all into someone else’s hands just bothers me. Plus, there were some weird issues…the airline changed our flight times and I didn’t find out until weeks later. Our hotel changed at the last minute. Stuff like that. Nevertheless, it really was an extremely inexpensive way to have a grand adventure and it’s hard to pass that up.

One of the main ways that they seem to make it inexpensive is that they fly in and out of Milan Malpensa (bad thought! best airport name ever) and you drive down to Tuscany. Malpensa seems have slightly less expensive flights from the U.S. than many of the alternatives. The other way they make it inexpensive is that you stay in Montecatini Terme–not Florence or Siena or a similar expensive city. It worked for us, at least for a short trip.

This Autogrill spans the highway! It may not look exciting, but they actually have good food and serve your espresso in little china cups.

That doesn’t mean that you shouldn’t study, or that you should drive everywhere. No matter what country you’re going to, you should always research signs, signals, everything. Just as an example, in Italy they have color coded parking spaces and if you park in a residents’ only spot you’re going to get a ticket. Good to know, right?

But the big thing to watch out for is ZTLs: Zona Traffico Limitado. Almost every city or town has limited traffic zones, marked by a big circle, and if you drive though you will get fined. If you then exit and drive through again at another spot, you’ll get fined again. So you need to pay attention, park on the outskirts, and walk–or take a train.

The other thing that’s interesting about driving in Italy is that enforcement is almost entirely by camera. They are watching you, and they will send you a ticket instead of pulling you over. If you’re in a rental car, they pass the ticket through the agency and it might be six months or a year later. It’s been more than a year, so I think we’re good!

I’m talking a good game about driving in Italy here, but I have to admit that when we picked up our Peugeot 208 Diesel (a really great little car) I was a little intimidated. It was around 9 a.m. and we had been in a plane all night and our phones were on airplane mode. We ended up driving around the airport roundabouts a couple of times, taking the wrong exit, then backtracking the whole way and starting over. But once we were on the Autostrada it was amazing!

The main north-south highway has around six lanes in each direction when you’re near the major cities, and people absolutely follow the rules. No one hangs out texting and driving 45 miles an hour in the passing lanes. Trucks keep to the right. Everyone’s driving fast, but they’re driving well. It makes a big difference! We were so cautious that a Smartcar passed us, but by the end of the week I was hitting 135 km/hour and worrying about having a ticket mailed to me.

There are a bunch of different ways to go from Milan to Tuscany, and we did the oddball one both ways: we hopped off at Parma and headed through the mountains to the coast. I’m sure that heading down via Genoa and being along the coast for most of the trip is really cool, but the mountains were amazing. 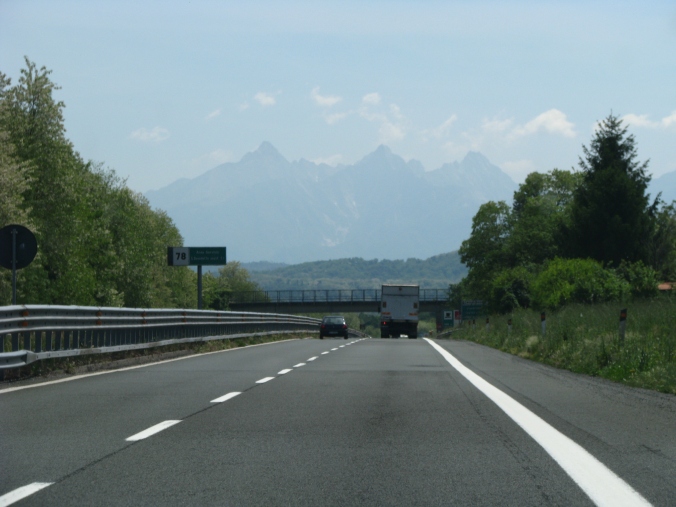 Someday I need to drive in Germany for comparison, but Italian roads are the best I’ve driven. Their tunnels are absolutely spectacular. They’re long and twisty and you’re allowed to pass, but for some reason it feels easier to maintain your speed than it does in our many local tunnels.

What an oddball town they put us up in! It’s a spa town (that’s what Terme means) that’s mostly relatively new. On the other hand, it’s on the main highway (and train line) that runs from Florence to Pisa. It’s really easy to get just about anywhere in central Tuscany from there, and that made it a great place to sleep.

We even spent one day wandering around Montecatini Terme and taking the funicolare up to Montecatini Alto, the ancient village. It was an incredible blast and makes me wonder why I don’t ride the inclines here in Pittsburgh. They’re really just funicolari! 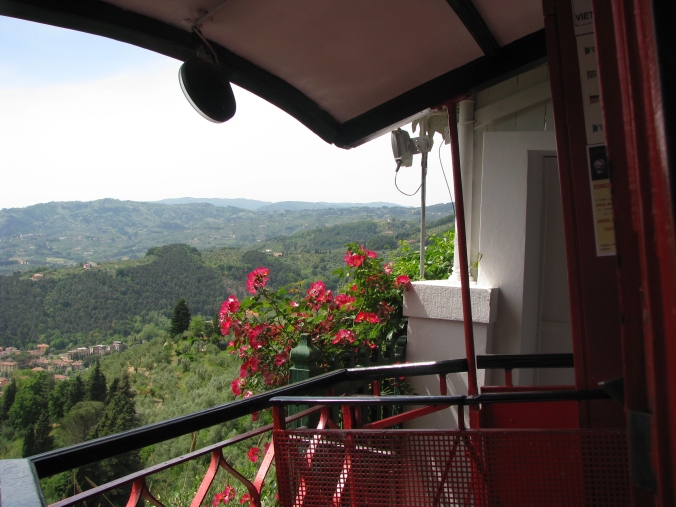 View from the top

Yep, I’m going to be that person. The one who calls Florence Firenze.

We started fairly slowly on our first full day in Italy, a little beat up by travel and by the prior night’s wine. But we did manage to make it to Firenze for lunch at the Mercato Centrale (fun, tasty, and worth it, if a little touristy) and then walked for hours and hours. We didn’t bother with the Accademia or Uffizi, largely due to lack of patience with lines, but did get a great introduction to the pleasures of walking around a great Italian city, looking at sculpture, and eating gelato.

Brunelleschi’s Dome. You just turn a corner and there’s one of the most significant architectural and engineering achievements of all time. 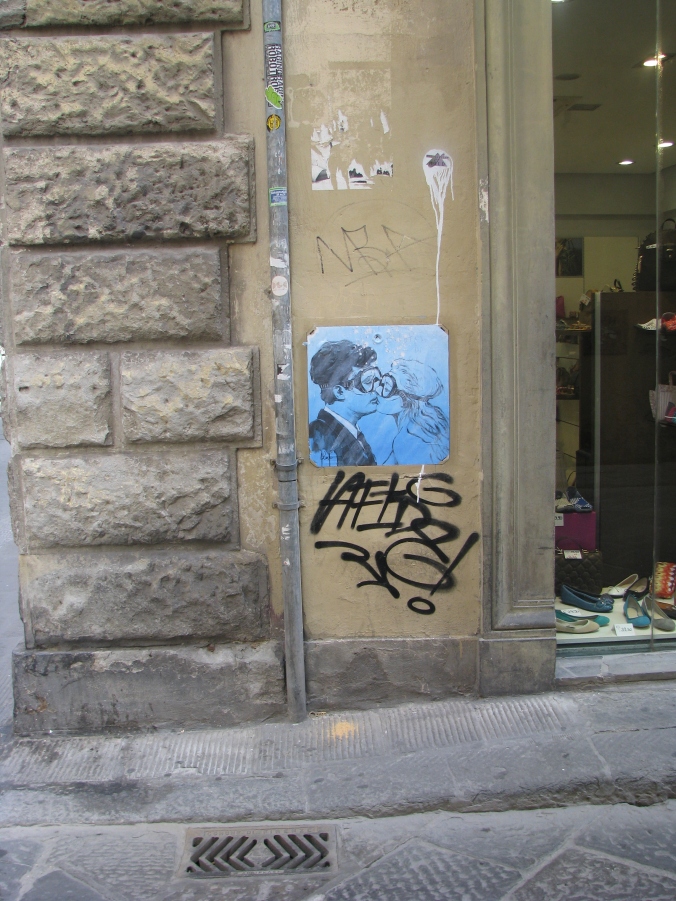 Italy has the best graffiti. 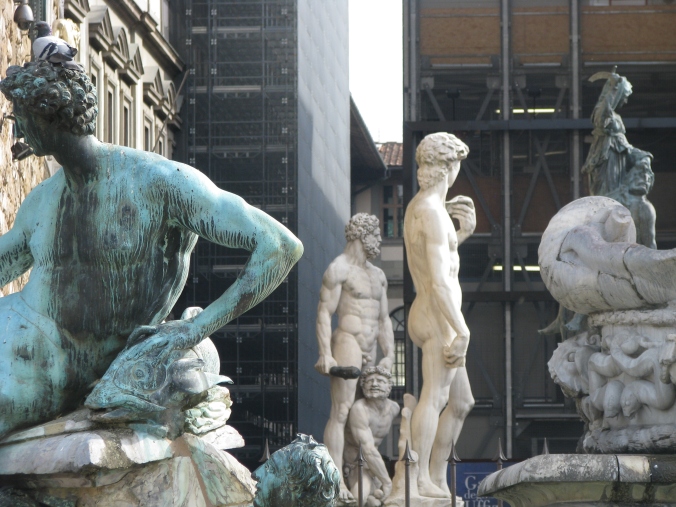 Yep, there’s a lot of sculpture. 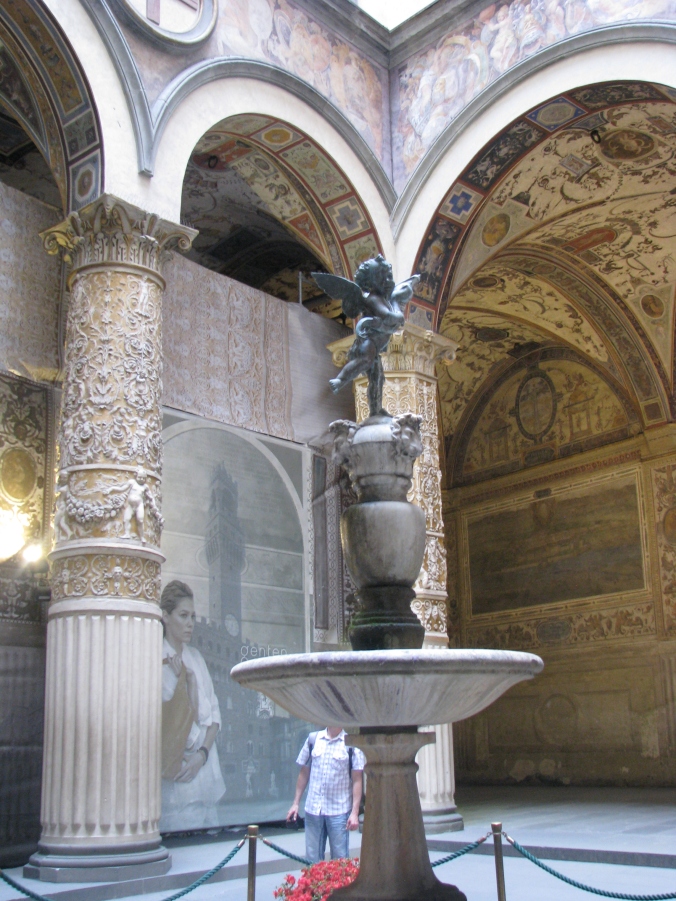 In the Palazzo Vecchio. 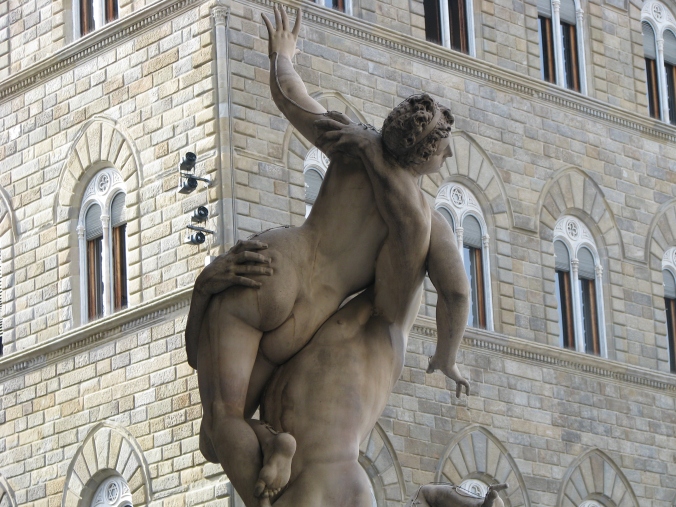 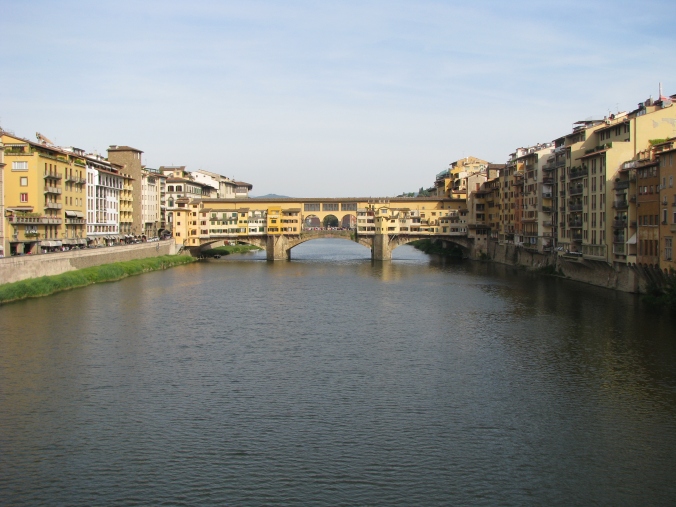 One of my favorite things! This window at Ferragamo holds the custom shoe forms they used for old time movie stars. Katharine Hepburn! Ingrid Bergman! And the shoes are gorgeous to this day, love the platform sandals at the top left.

More than once during this trip I wanted to stop, resign my job, and spend weeks just wandering the streets of a particular city. The feeling was strong in Siena. It was individual and eccentric in a way that few American cities manage (although we do live on a unique and eccentric place ourselves) and it generally just knocked me out.

We got there in a good way, too–driving through the heart of the Chianti region, looking at grape vines and olive trees.

Then when we got to the outskirts of Siena we got all fouled up, parked too soon and got lost, got back to the car and drove some more before managing to get a totally rockstar parking spot right outside the ZTL.

The whole place was just gorgeous, from the Campo to the Duomo. It’s small, but I could spend a lot of time wandering. 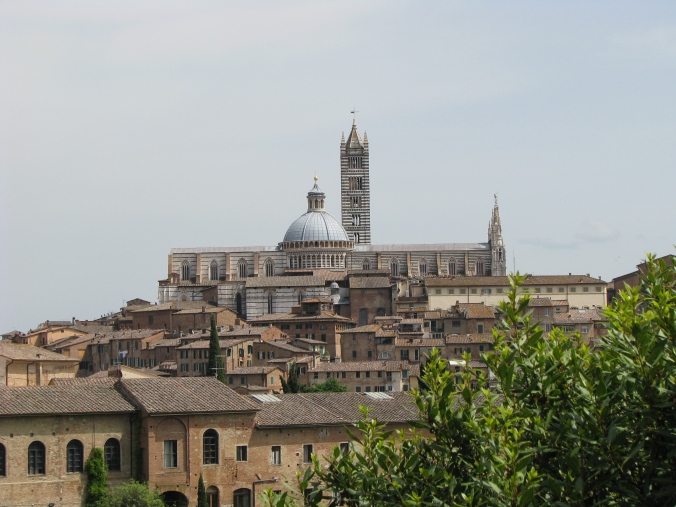 You can’t tell from the picture, but there’s a gorge around the old city and you need to cross a bridge to get there.

It just felt older than Florence. 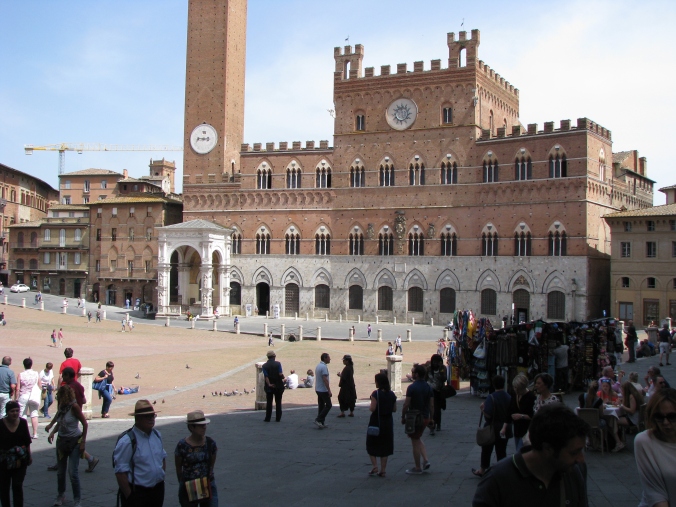 I have a habit of taking pictures of birds on statues. Wait until you see my pictures from Rome.

So yeah, this is a floor. To walk on.

Siena’s Duomo may be the most decorated building I’ve ever seen.

Saints, apostles, and a wolf suckling a couple of babies. 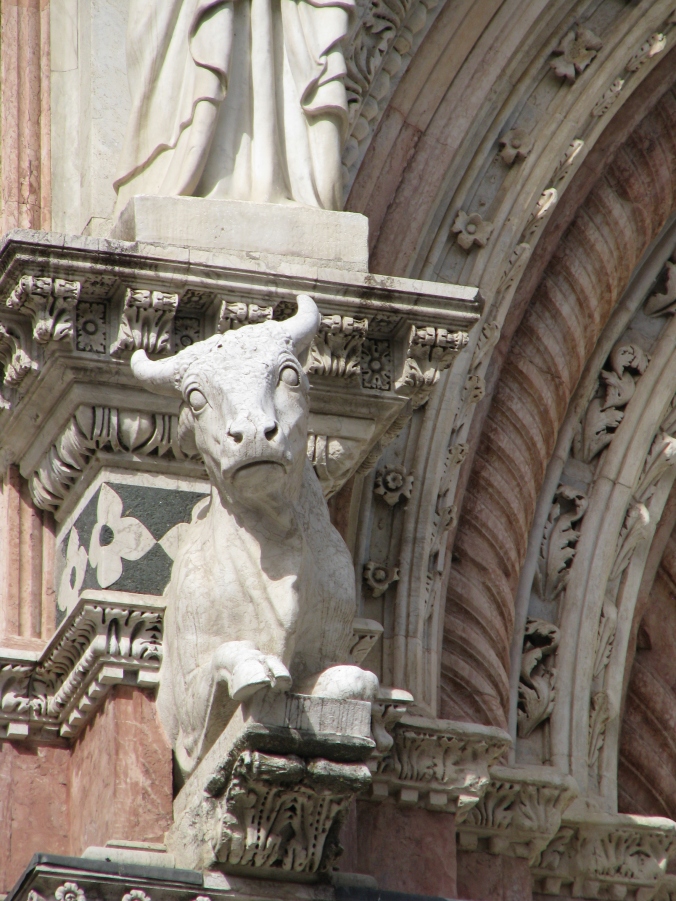 If your cathedral doesn’t have a cow or two it just isn’t doing it right. 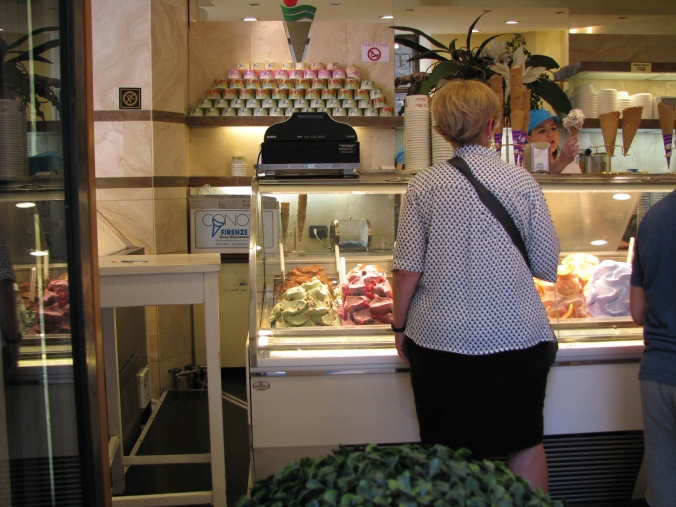 A gelato a day? Maybe more than one.

This is one of the lesser known cities in Tuscany (although that might be changing) and was one of our absolute favorites. It was just so great, even in an incredible downpour that kept us from renting bikes.

It was an easy half hour drive from Montecatini, we found a great parking spot, and we had a great lunch. So there’s three good things! And it was just really cool–it felt perhaps even more ancient than Siena, thanks to the watercourses and the piazza that was on the footprint of a Roman temple. And their Duomo was spectacular! I want to go back and wander around for days.

Every column and pediment is different, just because. 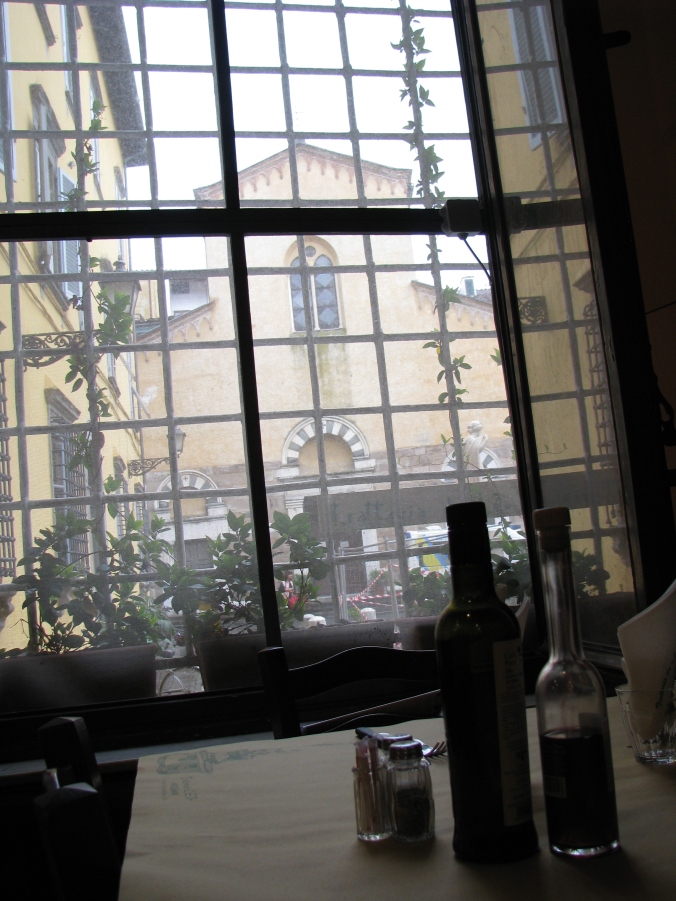 Lucca is very proud of their tower with a tree on top.

Nowhere else had such mossy statues.

It was really, really wet.

One of my favorite sculptures ever. It shows what to do in each month. It seems that in February you fish, in March you prune trees, in May you go out marauding.

In September you stomp grapes, in December you kill a pig. 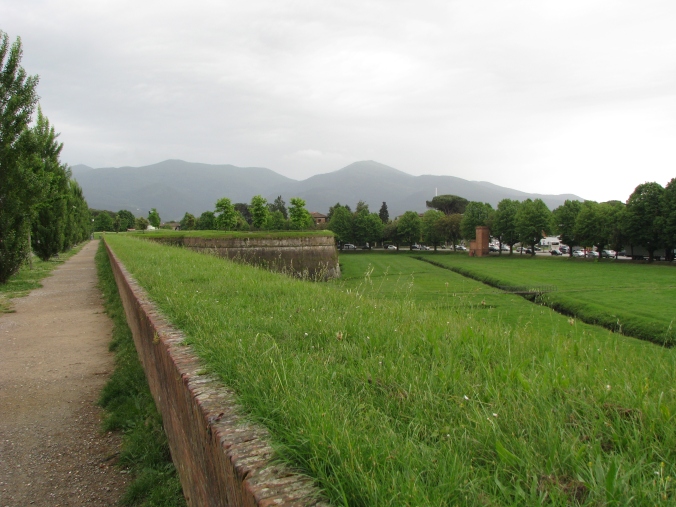 This trip was so momentous in so many ways that I need to split it up. There will be more…and soon.