There are some places in the world that are literally stunning. Big chunks of the American Southwest, for example—it’s hard to even drive in Southern Utah without running off the road because you’re gaping at every turn. St. John in the U.S. Virgin Islands is that way; the first time we went we spent all of our time with our mouths hanging open, gazing and gazing, and even though it’s a big wide world we had to return to actually experience it instead of just looking at it.

When I found cheap airfare to St. Thomas for my 50th birthday week I figured we might go to St. John again, but I’ve always had Virgin Gorda in the back of my mind. The second time we went to St. John we took a day trip over to see The Baths and it was pretty great, although climbing on rocks barefoot isn’t really my jam. We’d also gone over a year without using our passports, which is just unacceptable.

So Virgin Gorda it was, and it was a very good decision.

How We Got There

It’s a serious pain to get to from our fair city, involving either two flights and a looong ferry ride (which we did) or two big flights and a tiny plane for the last leg (which we may do the next time). All of our flights tend to leave at some ridiculous time like 5:30 but this one was at the luxurious hour of 7:00 a.m. Sounds good, but we went to a lovely wedding the night before and it felt more like 4:30. And even with a short layover and easy flights, 13 hours of travel is a lot of travel. But it does cut down on the number of gringos you run into when you’re there!

When we arrived at the ferry in downtown Charlotte Amalie they said it was going to be leaving at 4:30 instead of 4:00. There were no cruise ships in town so we walked along the harbor, stopping to look at the fishermen’s stand, and into town a bit. There were some food vendors set up as a fundraiser for a local elementary school so we had some nice fish, rice & peas, and johnnycakes while looking at the water then headed back and had our first Carib of many while waiting to board.

The ferry ride was amazing and beautiful. It passes by many of the gorgeous places in both the USVI and BVI. All along the North Shore of St. John I was saying, “There’s Salomon Bay. And hey, that’s Jumbie Bay, remember that? Oh, Cinnamon Bay and Whistling Cay, I always wanted to take a boat out there to snorkel. And Waterlemon Cay! We were there!”

I’m interested in Tortola cause it’s so incredibly hilly and so surrounded by sailboats, but I couldn’t find decent lodging in our budget. I’m pretty sure this is the marina at Nanny Cay. 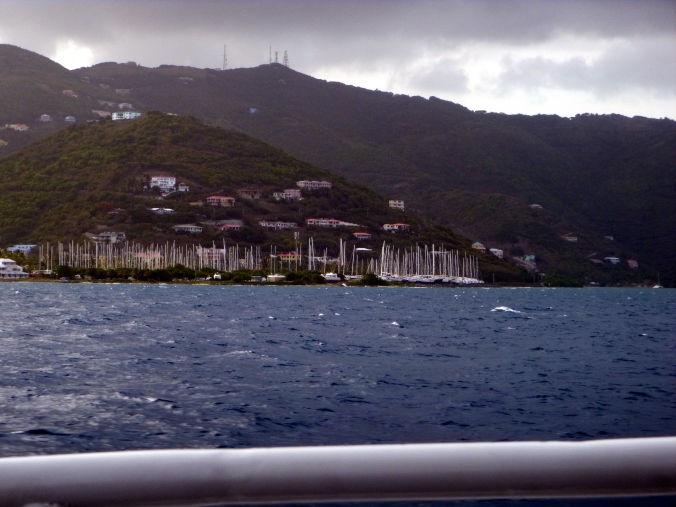 So many boats! Or I guess they’re yachts, buncha fancypants

Customs was really easy. For some trips we’ve gone to a local Italian market the week before and bought seriously good salami and capicola and cheese for our beach sandwiches (freeze them and put them in a small cooler in a checked bag) and they just let us right through, no problem.

I have officially outdone myself. Bayview Vacation Apartments is the best value in lodging that I’ve ever found, and I’ve found many. It’s hard to even know where to begin…it’s huge, for one thing. They’re not apartments, they’re townhouses, with a full kitchen open to a real dining room, a sunken living room, a powder room, two big bedrooms, two renovated bathrooms. There are FOUR porches, two upstairs and two down. The bedrooms have air conditioning, which you absolutely need in July. And the housekeeper comes in three times a week!

Our Jimny in our own private parking space

So, my thinking on vacation housing. This blog is largely about how to go to the same places as rich people without being rich. Since transport costs are pretty much fixed, there are only a couple of ways to make that happen: sleeping and eating. Despite our middle-aged spread we are not people who have any particular interest in eating three huge meals every day, so eating is really not such a big deal. Lodging, however, can be outlandishly expensive.

We paid $570 for a week in our two bedroom, two-and-a-half bath townhouse. For that money we could have had one night at Little Dix Bay (a very lovely, ultra-luxurious resort). We could have had one night and maybe a few extra hours at my dream villa on Mahoe Bay, which has an outdoor ping pong table with wet bar (yes!!), a four-hole putting green, and a Zen garden. We could have even made it to 3.5 days at Guavaberry Spring Bay.

But here’s the thing about these gorgeous ocean-view properties: you just sleep in them. Well, you also fix breakfast and maybe hang out drinking rum punch after you get back from the beach. And the way you get an ocean view is to build on a hillside and keep the trees cut back, so the 90 degree sun is just beating down on you. In many ways the Bayview approach, with this amazingly beautiful garden, is more comfortable. Shade feels good. 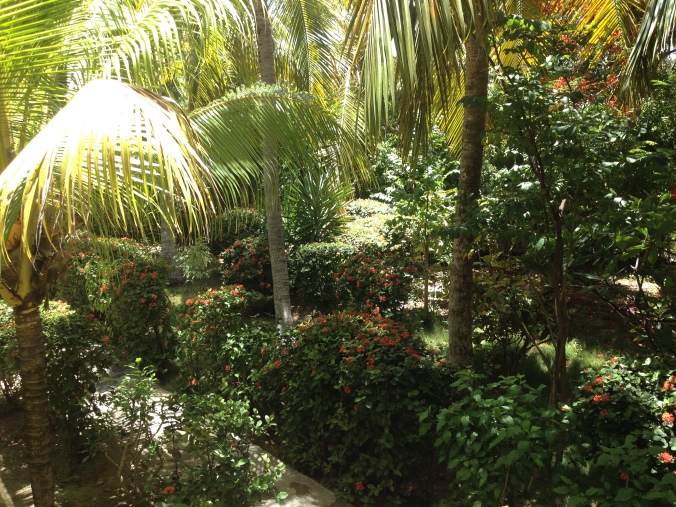 It was also impeccably clean, newly renovated with fancy bathrooms, and within walking distance of the yacht harbor (which has restaurants, shops, and a supermarket). The owner was kind, friendly, and helpful. Absolutely highly recommended, and a peek at her reservations board showed that she probably doesn’t need to spend a lot of time marketing these days…pretty much no vacancy in peak season.

What we thought we’d do:  rent a dinghy and boat around. Take the ferry to Anegada and try to see pink flamingos.

What we did: go to the beach. Snorkel. Repeat.

Savannah Bay, where we were pestered by beach chickens

I think I’m going to have to break this up into two parts, it’s getting so long. I’ll try to get to it fairly quickly while it’s still top of mind, because it’s going to be time to start thinking about our next trip soon. But just as a preview, the next post will be titled “Weird Creatures and Strange Times.” Oh yes.