Things we have seen in the water that have not freaked us out: a good-sized reef shark. Any number of barracudas, some at close quarters. An enormous pure white ray in Mexico, around four feet across (and maybe seven feet long?), that matched its background so perfectly that the only way I saw it was the little puffs of sand that it stirred up as it hunted.

Things that drove us from the water fairly quickly? This.

And, strangely enough, this:

Yeah, I know moons are not a particularly dangerous jelly, but they do have a sting and there were quite a few out there. They’re incredibly photogenic but I really prefer to use the zoom! That lobster was a monster, king of the crustaceans, and it seemed to be in a big hurry to get somewhere that was right behind us.

On our first day we made a big circle of the island to get our bearings, stopping at Hog Heaven for barbecue, rum swizzles, and the view, then planted ourselves on Savannah Bay for a snorkel and a nap. The nap was a little tough because there were plenty of people partying on Sunday Funday, but it’s a big, beautiful beach and wasn’t even close to crowded.

Sea Fan ready for its closeup

One notable thing about Savannah Bay: it’s maybe the only place I’ve ever seen a lot of healthy staghorn coral. I came to snorkeling late, after the horrible mass-bleaching event of 2005, and the staghorns were hit hard. But look at this beauty! And it wasn’t the only one!

And here’s a question for any fish expert reading this. What is this? Maybe 10 – 12 inches long, swam more by wriggling than flapping its pectoral fins, colors pretty accurate. I’ve been looking through the reef fish book and haven’t found it yet. Leave a comment and let me know.

I’m sure it’s not particularly rare, but it was a cool one.

We absolutely loved this bay. If we were wealthy we’d have a tough time resisting a fancy villa there…it might be best to avoid staying there if you like to explore, because it’s a really special place. It’s a double reef, kind of a big horseshoe, and everything is at an oddly perfect depth. It’s deep enough not to worry about scraping yourself and damaging the coral, but it’s shallow enough to see everything clearly.

It’s also where we saw our first porcupinefish ever. I heard Buck yelling, “Kate! Come over here! There’s a fish that looks like a bulldog!” And sure enough, it was hanging out where we could see it and it didn’t run away.

He was a pretty relaxed fish, maybe two feet?

Maybe the same guy, maybe not, a couple of days later

And because we’re weird that way, it’s not really a vacation without sea turtles. 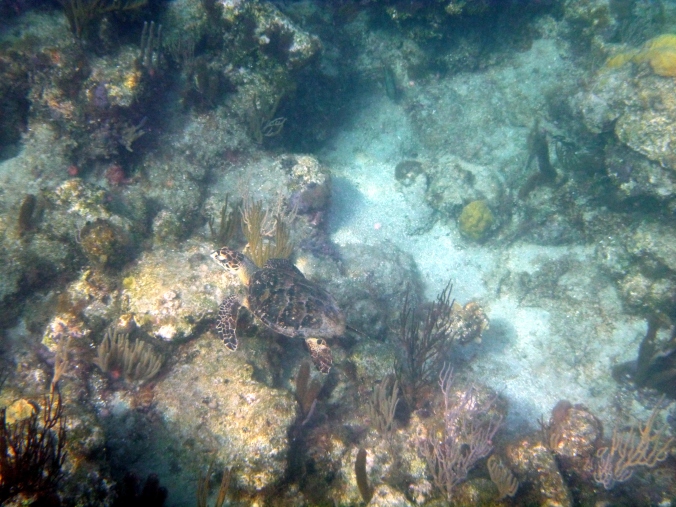 So yeah, Mahoe Bay’s amazing, but don’t stay there if you like to go adventuring, because you’ll never leave. Unless you’re afraid of 30-inch spiny lobsters:

Enough lobster to feed a family of four

The entire Nail Bay area, both Nail Bay itself and Mountain Trunk, kind of pissed us off. There’s a ton of construction on Nail Bay where they’re grading a hillside and building a new house. It was incredibly loud and it made me wonder whether the runoff is going to damage the reef. Mountain Trunk Bay had enough jellies to make us uncomfortable. In addition to the big moon jelly at the beginning of the post, there were a lot of little clear ones. I didn’t get stung. In fact, I never have had a real jellyfish sting—just the agua mala, but in Jamaica instead of Mexico. But that’s because I steer clear.

To top it all off, Mountain Trunk has dark sand that’s incredibly hot underfoot, which means that you have to wear your sandals to almost the edge of the water then kick them off and hop over the sand yelling ouch ouch ouch ouch.

That being said, it’s a beautiful bay and here’s what we saw before fleeing in terror: a fish wall.

It was absolutely immense—maybe 40 or 50 feet long and 20 feet high. From the shore it looked like a reef!

Spring Bay is one up from The Baths and is similarly full of huge granite boulders that form calm pools. It’s an absolutely gorgeous place to bask in the water and float around. In the main part of the bay heading toward The Baths the snorkeling’s pretty good; it’s full of the huge boulders and there are lots of fish and some nice elkhorn coral.

What can I say? There aren’t many things that make me happier than a big school of blue tang.

We don’t have lots of underwater pictures from Spring Bay because I made a long video while tailing that school of blue tang up toward the point. This is part of my personal theory of snorkeling…I try not to be a snob about it, looking for rare fish and making lists. My two favorite things are big schools of blue tang and parrotfish, just because they make me happy. Virgin Gorda had lots of parrotfish so I could float around watching them peck away at the reef to my heart’s content. Seeing something a little bit more rare or exotic is really cool, don’t get me wrong, but it’s not necessary for my complete enjoyment.

Devil’s Bay…aaah. So very lovely. Not a snorkeling beach, just placid turquoise water, perfect for basking. But also the place where we had an unpleasant experience with the weirdest creature we’ve ever encountered.

We walked down the trail rather than tangling with the Baths—plenty of rocks, but much more navigable. It’s lined with huge cacti and a really fun walk in general. Then, as we were basking away happily, like so…

…something sharp poked me in the butt. “There’s something prickly in my bathing suit,” I told Buck. “I think you brushed against a cactus,” he said. And we bickered a little about it, because even though I’m clumsy I tend to avoid cacti after an unpleasant encounter with a prickly pear in New Mexico.

Finally I managed to pull this poky thing out of my bathing suit. It looked like a quarter-inch tube of glass…weird. And then I started to feel more of them. And then Buck started feeling them, too. We started to look suspiciously at the buoys and the boats off in the distance, wondering if it’s possible for boats to start shedding their fiberglass.

After spending some time on shore picking this stuff out of our rashguards and bathing suits (and wondering how the other people in the bay could stand being there, even if they did have a six-pack with them) we made our way back and had a drink at Top of the Baths, floating in the pool and picking bits of glass out of our suits. Devil’s Bay, indeed!

It would have remained a mystery except that I kept thinking about it and through the magic of Google found out what they were: sea butterflies! From Wikipedia:

They are rather difficult to observe, since the shell (when present) is mostly colorless, very fragile and usually less than 1 cm in length. Although their shell may be so fine as to be transparent, it is nevertheless calcareous;[4] their shells are bilaterally symmetric and can vary widely in shape: coiled, needle-like, triangular, globulous.

These were so fine as to be transparent, and they were definitely needle-like. Here’s what they look like picked out of your rashguard weeks later and put on a black background for contrast:

They were clear when we were there, but turned white after going through the laundry.

Sea butterflies! So now you know!

We’d been monitoring the weather, since even a low-key hurricane season bears watching when you’re in the Caribbean in July. And sure enough, Tropical Storm Bertha made its way up through the islands and arrived the day we were supposed to leave.

We checked in with Speedy’s and they said they would still be running. We thought of leaving for St. Thomas a day early and getting a room there, but we were enjoying Virgin Gorda too much so we just decided to go with the original plan.

Then, after one last day on Mahoe Bay, we got back to Bayview and found out that St. Thomas had closed the port as of 5:00 p.m. We weren’t getting there that way, no matter what. Luckily, our apartment had two more free nights and American Airlines provided free changes due to the weather, so we just decided to stay. As my mom wrote when we e-mailed to line up an extra day of dog sitting, “Well, it’s a new experience and at least you can say you’ve been through it.”

And it was the laziest day of our lives. We charged everything up, bought some extra groceries, beer, and mixers, and just spent the day on the porch watching the storm.

It wasn’t that violent, but it was incredibly wet

Honestly, we’re just now getting over it, a month later. It turns out that spending a day doing nothing, while it sounds appealing, really isn’t good for you. It makes you foggy and the fogginess lasts like a nagging cold.