I absolutely understand people who go to Jamaica and never leave a resort. I just disagree with them quite intensely and feel the need to question their fears, motivations, and general attitudes toward people of different cultures and socio-economic levels. Because if you’re afraid of Jamaica (or Mexico, or any inner city in the United States) that’s on you. Yes, there’s crime in Jamaica. And in Mexico. And in my neighborhood. And even out in the mountains of Pennsyltucky.

There’s a whole world out there where people look and sound and think differently. That’s why you travel. It’s not a reason to stay away or lock yourself up in a resort.

So, down off my soapbox.

People will claim that they want a resort for the relaxation. All I will say is go to Treasure Beach. You’ll be really relaxed, verging on comatose. We’ve been twice at this point, and we’re trying to figure out whether we should ever bother going anywhere else on spring break. It’s that great.

Treasure Beach is a series of bays on the south coast of Jamaica and describes itself as “the home of community tourism.” Their branding is accurate: it’s a treasure and you will feel like a part of the community.

The best known place in Treasure Beach is Jake’s Hotel, and that’s a pretty great claim to fame. It’s a really wonderful, quirky property that defines “boutique” while still being accessible to the community at large. If we were into hotels we’d stay there in a heartbeat, but even if you don’t like hotels it’s worth a stop because the food is good, the drinks are strong, and you will feel welcome.

The bays that make up Treasure Beach are, from west to east: 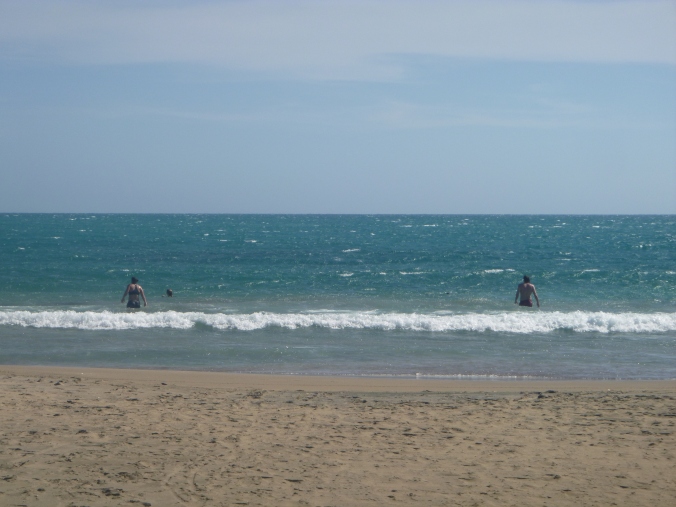 This is the BUSY bay of Treasure Beach, which gives you an idea of how peaceful it is.

Jamaica has two international airports, in Montego Bay and Kingston. You’ll want to go to Montego Bay for Treasure Beach (and for most other areas of Jamaica except for Kingston itself and maybe Portland Parish).

Getting to Treasure Beach takes a while–it’s a solid two hours from MBJ, going up and over the spine of the island and down along the beautiful, peaceful South coast. The closest big town is Black River, which goes back to the 17th century and has some relatively old surviving buildings, along with the area’s largest groceries and the river itself.

So how do you deal with this drive? Just contact Treasure Tours. In fact, just contact them for most things, they’ll hook you up and make sure you’re happy. They have a team of great drivers, will take you on tours, represent a bunch of villas and guesthouses…and they’ll keep checking in to make sure you’re having a great time. It’s a wonderful company. They will even arrange to have one of their drivers change money for you at a really good rate.

Accommodations are available at all price points from all of the usual suspects: VRBO, Airbnb, Booking.com, etc. But you can also zoom in on the Google maps and find a bunch of smaller places that can be worth checking into…Shakespeare Cottage, for example, is very centrally located, has rooms as low as $26 a night, and seems to have many repeat guests.

In March 2016 we stayed at the Moringa Ingadi Village (hosted by Jayne), just a few minutes from Frenchman’s Bay. It was a wonderful place, quite new at the time, and just a great setup for a group of friends. We needed four bedrooms, so we took Frangipani House and the Moonflower Treehouse and we were quite happy with the accommodation. We had very comfortable rooms, several lovely gathering areas, and a fridge to hold the Red Stripe and mixers. Mission accomplished!

We spent our time eating, drinking, swimming, wandering, and adventuring. Moringa Ingadi is a five minute walk to Frenchman’s Bay so we went down every day and battled the waves (it was pretty rough that year), or varied the routine with a walk to the other bays, or took a tour. And of course we spent a lot of time eating and drinking, because Jamaica’s one of those places you could go to just for the food.

And speaking of food: go to Smurf’s. Treasure Beach has a bunch of restaurants, but for breakfast (and perhaps some dinners, and to have a cake baked for a special occasion), go to Smurf’s. Miss Dawn roasts her own Blue Mountain coffee in a cast iron skillet and serves ridiculously large Jamaican or U.S. breakfasts for around JA$650. And it’s delicious! 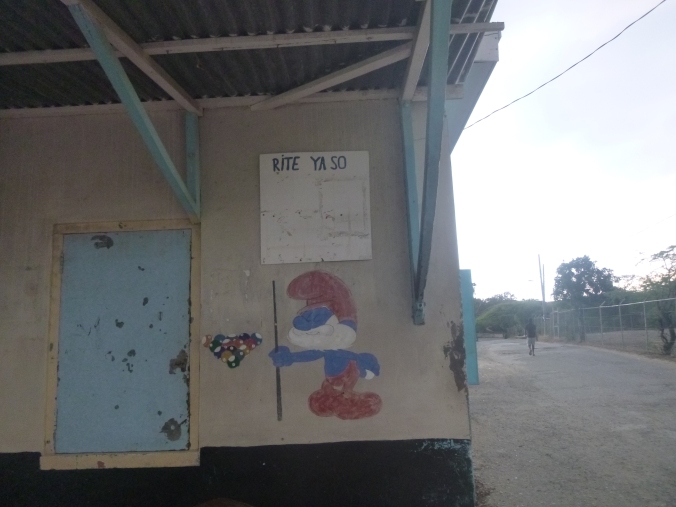 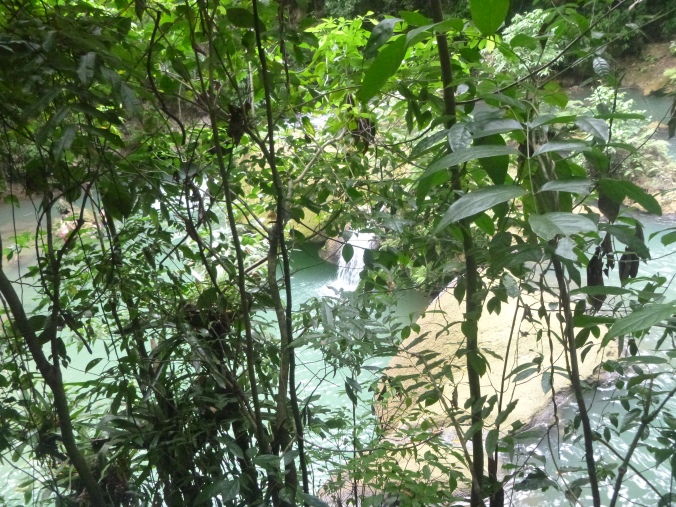 There are two big ones you really should do from Treasure Beach: YS Falls and the Appleton Distillery and the Black River and Pelican Bar. They’re both a pretty full day and are both absolutely worth it at about $50 a person for each day (with some extra for food, drinks, and admissions).

YS Falls is just a gorgeous place, with a bunch of waterfalls in the rainforest, a zipline, rope swings into the water, and some nice pools and decent food. The water is a little cold for me, so I spent my time wandering around looking at the plants and people watching. 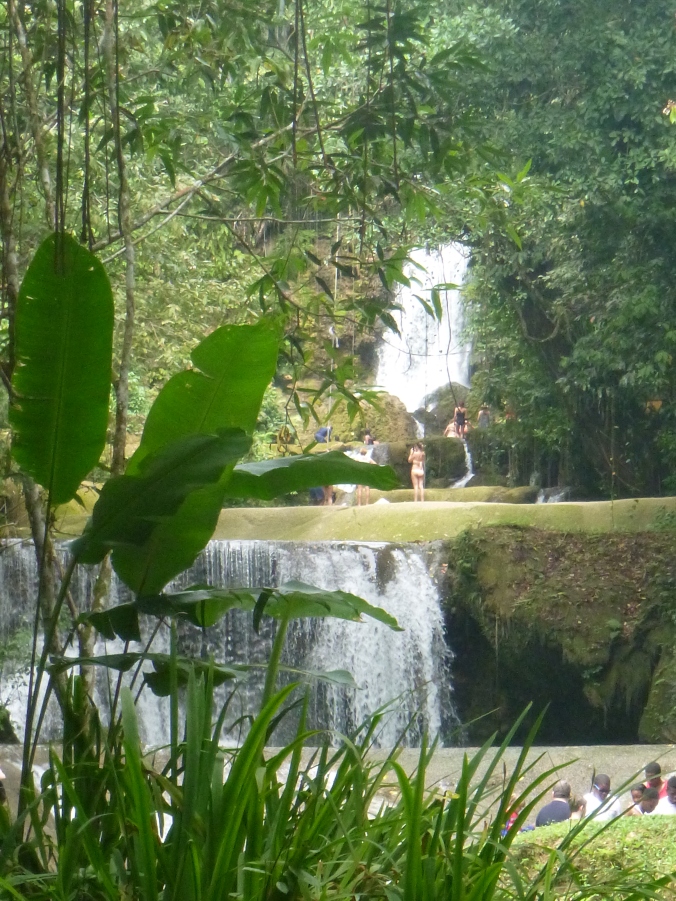 It’s not too hard to combine with Appleton, which is fairly old and historic. They really know how to do a tour: they start you off with rum punch, then take you through the process with very engaging guides, and finish you off with a generous tasting session. We did buy some booze there, but it’s not absolutely necessary…and the amount you have to drink pretty much covers the cost of admission.

But the drive itself is great. On the way to the falls you pass through a village where the main business is selling spicy boiled shrimp. The plantation with the falls also is a working farm with cows and thoroughbred horses (which seem pretty happy in Jamaica!). Then between the falls and the distillery you pass through a bunch of villages and cane fields and drive down Bamboo Avenue which is just as nice as it sounds.

So now we get into a really crazy and wonderful adventure. I’ve talked before about wanting to go to the Pelican Bar, which is driftwood held together with zip ties and rusty nails on a sandbar hundreds of yards offshore. You can just catch a ride on a boat out there, or you can combine it with a trip up the Black River.

Take my advice: go up the Black River. Make them take you all the way to Sister Lou’s for crabs. Sure, have a drink at the Pelican Bar on the way back, but the Black River is amazing.

But we didn’t really know all of that the first time we went, when we went with High Grade.

We asked Jayne and Carlisle the best way to do it, and they hooked us up with High Grade, their neighbor on Parottee Beach. Instead of grabbing a boat from Frenchman’s Bay, we got a ride up there and found High Grade…owner of an old wooden boat, proprietor of the world’s smallest beach bar, and sound system aficionado.

High Grade didn’t do this stuff often. He didn’t have a line of patter–and in fact, spoke mostly patois and very little English. But he had one of the most amazing bars I’ve ever been to: 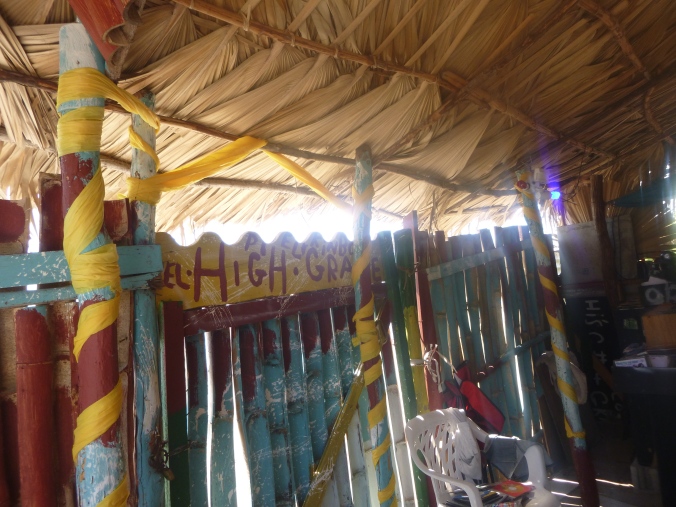 After a lot of preparation and a few Red Stripes, we went up the Black River, looking at crocodiles and mangroves and some guys who were illegally spearfishing. We didn’t make it all the way up to Sister Lou’s, but we loved it.

Then we went out to the Pelican Bar, but the water was rough and they appeared to be closing up, so we just went back to High Grades for beer, fried fish, and the sunset. 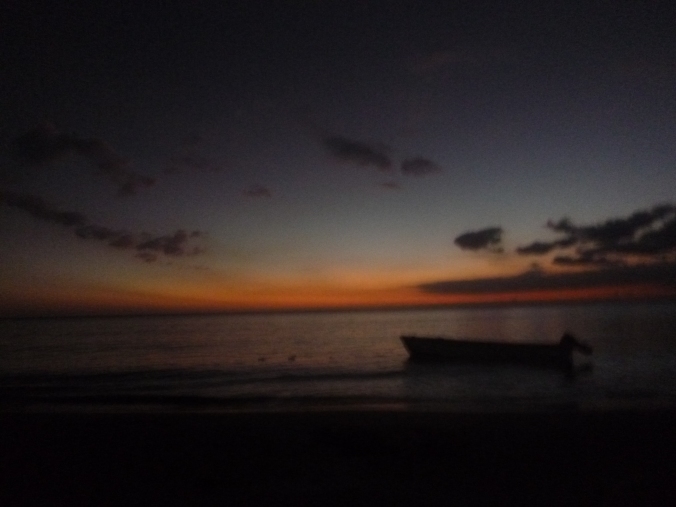 And yes, we were the only people there.